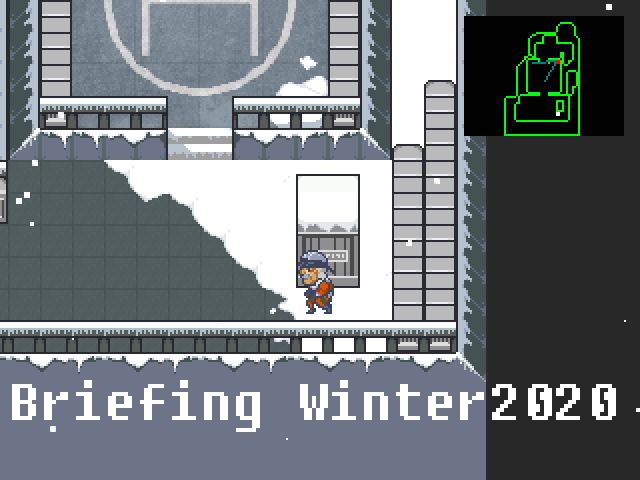 Some may have wondered, where did the Briefings go, what happened to our monthly fix? It’s as if they got arrested by Jim Houseman! To be frank, I lost some interest in the monthly work and decided to take a couple months off. So, the format will now change to a quarterly format for each season.

To begin, let’s look at some of the coolest runs, finds, and discoveries of 2019. This is not in any particular order.

It took 3 years for Puchiedarcy’s 26:40 run to be beaten, with Jaguar_King completing a 25:59 in May 2019. Big Boss on this version has several failure points, between the Hell Roof, Scorpions, and Suicidal Guard RNG. It is a Big Boss run that demands a lot of patience to do. Congratulations to Jaguar for this run!

After hours and hours of grinding, Aerlien achieved the first sub 54 minute run – a 53:47 in April 2019! Perhaps one of the most optimized games in the series, it’s hard to emphasize how difficult Twin Snakes can be. To think how far the game has come since Calebhart42’s 1:02:21 in 2011, a great run given its routing, is mind boggling.

With an improved route that includes a very fast one cycle on The End, Very Easy became the fastest category in MGS3. Thanks to the efforts of ApacheSmash, myself, and others, we gave Very Easy its own identity! ApacheSmash got below 1:13, with a 1:12:42 run in November 2019!

As discussed in the October 2019 Briefing, Coppertank accomplished routing both of the Ac!d card games on NG+. In January 2019, casinocoin completed the first NG run of Ac!d 1 in 7:01:44. Many were curious who would dive into the world of tactical stealthy card action, and we celebrate the brave few who did so! This means every game in the series (barring obscure mobile games) is routed in someway.

After several months of working out a route, I was very happy to achieve my 43:29 on Very Hard Difficulty with no unintentional deaths and Big Boss in February 2019. This was one of my hardest challenges in speedrunning, as this game can be very demanding and unforgiving. If you would like to learn more about this run, you can listen to Coppertank’s audio interview with me.

While this is discussed later in the Briefing, it can’t be overstated how huge this discovery is for one of the most storied speed games in the series! What an impressive find in December 2019!

One of the harder runs in the series, Spartyy pulled off a 2:07:27 in November 2019! This narrowly beat Jaguar_King’s 2:07:48. Big Boss is unforgiving in this run, due to the amount of luck, tight execution, and patience required.

9. The Phantom Pain Any% and Perfect Stealth No Kills WRs by Metsametsa

Continuing his dominance in the game, Metsa accomplished a 1:56:43 in Chapter 1 Any% in August 2019! Along with that, he performed a 2:10:16 Chapter 1 Perfect Stealth No Kills in November 2019! Creativity, glitches, and smart routing brought these categories down for one of the more unique runs in the series.

Pythonicus, well-known adorer of Portable Ops, pulled off the first Single Segment Tsuchinoko run in April 2019, clocking at 48:52! Playing on the PAL release on PSTV, he got down to business like no one did before. While the record has seen advancement since then by Jaguar_King and Pythonicus, we should celebrate the pioneer spirit!

Not many things in the series compare to the wackiness of Peace Walker Co-Op runs. For TFA3, Pythonicus and MiniOmegaKing box grunted their way to a 2:32:20. It’s quite fun to hear their live reactions to their run as well! Remember folks – if you ever feel lonely, find a pal who wants to wear AXE Body Spray shirts and grunt in cardboard boxes with you.

Rounding out this list, the first sub 53 was achieved by Darkslayer with a 52:59 in August 2019! This is an impressive completion, given that is not played on the fastest platform, Xbox One. Seems like Ja-err Darkslayer really ripped Armstrong a new one!

Tactical Fundraising Action 3: Irish Thunder clapped loudly! In support of RaichuMGS going to AGDQ2020, the Metal Gear Speedrunning community raised $1069 for his travel expenses. The total exceeded our goal of $1000!

TFA3 featured our new restreaming setup, utilizing NodeCG and a dashboard setup developed by Toast, Chewza, and PreciousRoy. This gave restreamers a more streamlined, automated setup that made the process easier, faster and simpler. No need to turn off and on the stream to switch restreamers, as the workflow is entirely web-based.

You can find the whole playlist of runs here.

A New Paradigm in VR Missions!

A strategy discovered by dlimes13 completely changed how Metal Gear Solid VR Missions is played.  The game is 20 years old, so it’s not often that a shake up of this magnitude happens. Most players thought tying the tool assisted speedrun and tying records as old as the game itself meant the game’s limits were reached.

Little did we know that a mechanic in MGS1 could mean so much. The first person view lean (or, shifting Snake’s weight in first person) ended up being the secret weapon. Due to a programming oversight, leaning into the end goal of a VR Mission means you complete the level without running into the goal. Because Snake’s hitbox shifts, the game assumes that you reached the goal! This leaves Snake pumping his fist in victory while not even being on the goal. While this only saves a fraction of a second (up to 0.25), that small amount makes all the difference.

You can learn more about the discovery in my video above!

Ultimately, The Monkeys beat out The Ocelots, 3 to 2. The Monkeys finished all five games in 6:21:04, and The Ocelots did so in 6:23:02. All races had some very tense moments, including a down to the wire race for Snake Vs. Monkey!

We will be announcing the Spring 2020 relay race soon, so keep your ear to the ground!

You can watch the whole race here!

It seems like a New Year’s Resolution for Apel and Exisidis2 (aka Magnum66, who helped develop the MGS1 Any% route) was to break apart MGS3, a game that hasn’t seen any sort of Any% route. There is so much to go over, that a separate article will be written detailing these discoveries.

Starting with Exisidis2 on January 27th, a method to remove collision was found in Bolshaya Past Base, the area just before the boss fight against Ocelot. You can watch the NSFW discovery here. This is achievable on any version of the game.

To provide a brief explanation – in each area of the game there are ‘subareas,’ such as the rooftop of the hut. Connecting with the roof at a certain angle will make the game think Snake is still on top of the roof, even though he is not.

While this OoB is not useful in the speedrun, affecting subareas is!

This was just the start for Apel, who went on a glitch hunting spree in February, using PCSX2 to emulate the PS2 versions. Apel found a method to skip The Pain boss fight with Fake Death Pills, the item that keeps on giving with MGS3 routing! With the use of 2 FDPs, you can get past the triggers for the fight, and swim to the next area. This is usable on all versions of the game, but the need for 2 FDPs means this isn’t possible on Extreme (with access to only one pill)…yet.

MGS3 kept on giving, specifically on the original Snake Eater PS2 releases in North America and Japan. With a combination of White Phosphorous grenades and hang mode, the Ocelot Unit and The Fury can be skipped. The Fury skip is too slow to be viable in runs, due to how far away the exit is.

if you take damage just before the ‘climb up’ anim[ation] ends, Snake’s position changes, but the game cancels that anim[ation], so he goes back to the hanging state

that makes Snake hang on the air

Last but not least in this brief look, the entire visit to the Granin Gorky lab can be skipped on the PAL PS2 version. With a specific set of movements to abuse subareas, and a properly angled climb on the box, you can clip to Svatogornyj South

What a rush! It goes to show how much is left to uncover in these games. Great job to both apel and Exisidis2.

If you fancy yourself a glitch hunter and want to look in this series, there is an open $650+ bounty for finding a skip in MGS2.

The start of the year has seen multiple marathon runs from community members, showing off their Metal Gear skills on online and in-person marathons!

The start of the year has seen multiple marathon runs from community members, showing off their Metal Gear skills on online and in-person marathons!


Thanks for reading and your patience for this article! I’ll see you in June for the Spring Briefing. Until then, keep it up, Snake aficionados.