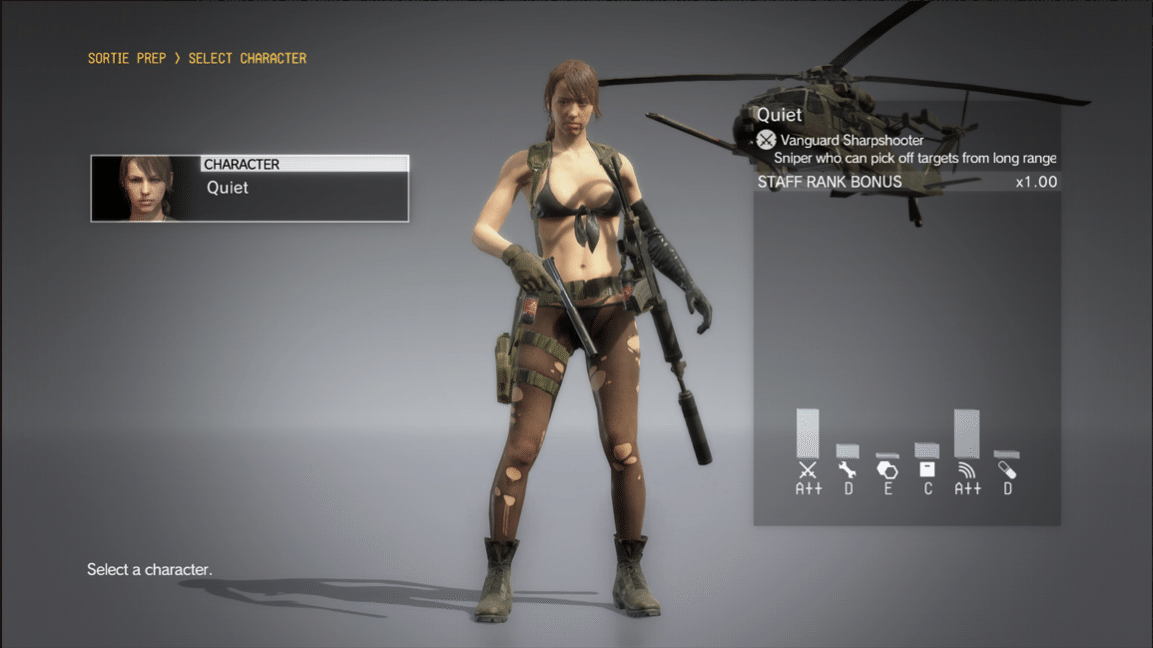 Quiet is a sniper who loses to Venom Snake in a duel in Afghanistan. She becomes a prisoner at Mother Base until she proves she can be trusted to work with Diamond Dog personnel. She’s then available as a companion character who can assist the player on missions.

Quiet rarely speaks and carries three sniper rifles with her, the lethal Wicked Butterfly and Sinful Butterfly and non-lethal Guilty Butterfly. Her most noticeable trait is her considerable lack of clothing, explained in the game as a result of a parasite treatment she received. The parasite gives her incredible speed, perception, durability, longevity, phasing, and invisibility, but as a result she must breathe and take in nutrients through her skin. Wearing clothes will literally suffocate her.

In-game, Quiet’s superhuman abilities cause her to play much differently than Venom Snake. Quiet can aim down sniper rifle scopes with minimal shaking, and can run faster. She can also jump up to ledges where Venom Snake would normally need a ladder, dash forward, and go invisible when completely still. On account of the parasite, you won’t be able to change Quiet’s head options or uniform while playing as her.

The new update also adds a hard difficulty to Event Forward Operating Base missions and fixes a few bugs. The full details of the update can be found on Konami’s blog.

Metal Gear Solid 5: The Phantom Pain is available on Xbox One, PS4, and PC.