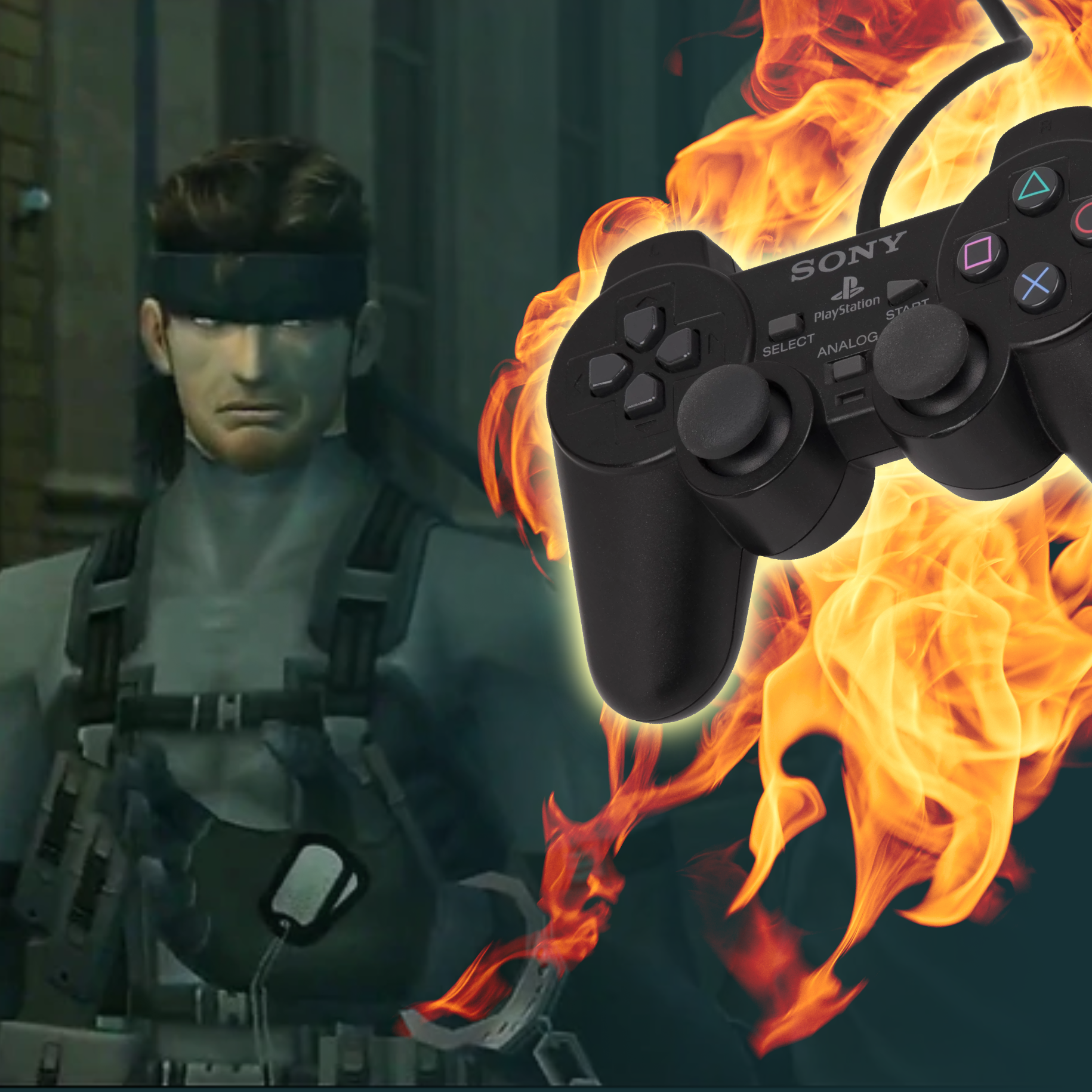 It appears to me that the importance of purism in speedrunning is far more common among casual viewers than more devoted fans of the hobby, or amongst speedrunners themselves. Of course, as with anything in life, there are exceptions. Extensive debate. Controversy. Difference of opinion. And on the internet, there’s no crime more egregious than having a different opinion.

I’d like to take a closer look at one specific rule that flies in the face of speedrunning purism. We will dive into the arguments for, and against its inclusion, and how it ultimately came to be allowed. Finally closing with my thoughts on this controversial community decision.

Anyone familiar with Kojima’s game design philosophy will be familiar with his insatiable love for exposition. Cinematic cutscenes and talking-head codec conversations make up much of the overall run time in every Metal Gear Solid title. Metal Gear Solid 2 is no different, with well over four hours worth of content to be painstakingly skipped during the speedrun.

To skip a cutscene: mash the X button through the black screen that precedes it as fast as you physically can. The faster you mash, the more likely you are to get a frame-one cutscene skip, saving you precious time. Simple enough.

To skip a codec: mash the triangle button during the load-in of the codec as fast as you physically can, but – you want to end your mashing with a strategically timed double press. Tap once immediately after the game recognizes inputs, and you merely pause the conversation. Tap it three times, and you will pause it as well. Done correctly, with that sweet, sweet double press, an automatic dialogue skipping mechanism will be triggered.

What are we left with? About a full hour of frequent, frantic mashing sequences. All of which to be done between highly execution-based gameplay with very little RNG to speak of. These seconds matter.

A natural part of optimizing the run? Sure. Unless it doesn’t have to be.

There have been previous occasions when the Metal Gear Speedrunning community has discussed allowing the use of rapid-fire controllers to bypass these cutscenes and codecs. Most discussions were very short lived. Aside from the inherent problematic nature of allowing third-party hardware or software tools in non-TAS speedruns, there was one sticking point that had proved much stickier than the rest; the torture sequence with Solidus.

This torture sequence is notoriously difficult on the European Extreme difficulty setting of original releases of the game. It requires eight button presses per second for nearly a full minute straight. It’s intentionally excruciating. So much so that it is one of the few gameplay segments Bluepoint decided to revise when they released their HD collection versions of the game. Making this segment a cakewalk on all difficulties, including the hardest.

Solidus torture has acted as a huge proverbial wall for potential runners of the game on European Extreme difficulty, many of whom claimed they would love to run the category, but simply could not pass torture. Nevertheless, it’s an intentional sequence as intended by the developers, and as such, remained a huge point of contention for allowing turbo.

Do we allow turbo for skipping cutscenes and codecs, but ban it for torture? If we allow it for torture, should it be banned through the rest of run? If so, how would that be enforced?

These questions and more usually put a stop to the turbo debate in the MGSR Discord server in short order. But without fail, the loud and proud turbo supporters would undoubtedly revisit the topic every few months. Until one fateful day, August 12th, 2020, the community poll swung heavily in favor of allowing turbo for all speedruns of the game.

So, what happened? How could this be? Who do we blame for this?

Even to a casual viewer of speedrunning, the arguments opposing turbo are rather obvious. Accepting the use of tools that are not directly a part of the game is generally frowned upon in most speedrunning communities. And for good reason. Ideally, all one would need to compete is the correct platform, and a copy of the game.

But we don’t live in an ideal world. And there’s a grey area here with Metal Gear Solid 2, especially for the PC. An admittedly awful PC port, in order to run well on modern hardware, a fan-made patch known as V’s Fix is recommended for all runners. Even after Good Old Games re-released the game on their platform, GOG themselves recommend this same fan-made patch be applied for more options and a smoother experience.

It could be argued that even the allowance of this third-party fix flies in the face of speedrunning purism, but the game is nearly unplayable on PC without it. A litany of technical issues abound from trying to play a notoriously bad port on modern hardware without this fan-made patch.

As it turns out, a few runners discovered a certain configuration file that accompanied the patch. Within it lay options to apply turbo functionality “natively” in the game. With a few small tweaks to the .ini file, one could toggle turbo button presses for any of the inputs. Complete with an audio cue to confirm if rapid fire had been enabled or disabled. (Fortunately, with a bit more technical work, this too was customizable.)

And with that, the great turbo debate was revisited once again. Now with an accepted and widely used fan-made patch applied to a janky-ass PC port, and a manually edited configuration to allow turbo functionality. Functionality which was obviously not developer intended.

How could this possibly be allowed in legitimate speedruns on an official leaderboard?

Let’s break it down.

Accessibility: Every person that runs Metal Gear Solid 2 on PC is recommended to install V’s Fix. To not install the patch is to handicap yourself right out of the gate, with limited controls, bugs and instability. This means that every runner of the game on PC has the same access to this turbo functionality. No need to purchase a special type of controller or download any additional software.

Consistency: It can be argued that allowing turbo levels the playing field. The sheer number of cutscenes and codec skips required throughout the game means that faster mashing has the potential to save seconds over the course of the run. The use of turbo evens out this discrepancy among portions of the game that have essentially nothing to do with the execution of actual gameplay.

Safety: Repetitive stress injuries such as tendonitis or carpal tunnel syndrome are a legitimate concern in this run. After hundreds, if not thousands of attempts of a speedrun with button mashing as fast as physically possible required through a significant portion of the sixty-minute duration, eventual injury is almost a certainty. To run the game competitively, is to risk debilitating injury.

Of course, there are counter arguments to every one of these.

Physicality: Mashing through cutscenes is a part of the game. Yes, some people may be able to do it faster than others, but such is the nature of speedrunning. Shouldn’t those runners be allowed to embrace their advantage to save time against those that mash buttons more slowly?

Risk: And as for injury, perhaps that’s simply the risk one takes when engaging in a competitive hobby. If one wants to compete against the best of the best in the Olympics, isn’t the possibility of injury just a part of the game they chose to play?

Revisiting this now, it seems cut and dry, at least on the surface, that turbo should not be allowed. Directly modifying files of the game to eliminate a real, competitive advantage for certain runners. And that’s to say nothing of the torture sequence near the end of the game. A true, developer-added sequence that can only be passed by incredibly rapid, sustained button mashing.

So again, with all the legitimate concerns surrounding the allowance of this tool, how could it possibly have been accepted by the majority of the community?

If there was one item that stood above the rest, the injury concern appeared to be what won over the community. Aside from the mere possibility that one could be injured from running the game, a few very active runners already had experienced severe RSI from their time with it.

Which brings us out of the objective fact portion of this piece, and into my subjective opinion. And as is the law on the internet, my opinion is the only correct one.

I, myself, have suffered severe RSI during my time chasing world records in Metal Gear Solid 2. To this day, I’m undergoing regular physiotherapy sessions for pain, discomfort and nerve damage. The possibility of surgery looms as a last-ditch effort to repair the damage done from my years of mashing through cutscenes in this godforsaken game. Which I love.

With that said, it’s quite clear where I stand on this one. I can respect the purist’s position, absolutely. In fact, while present for every previous turbo discussion in the past, I had voted against. Editing game files, allowing outside hardware or software control of direct inputs. It’s almost unheard of.

But I don’t wish this pain on anyone. Least of all the fresh faces that have swarmed toward this great speedgame since the inclusion of turbo. When the last poll was proposed, I voted for a better, safer speedrun. For all runners.

On top of that, turbo management is legitimate speed tech that requires practice to implement effectively. Activating and deactivating turbo depending on room and context is key to a successful run, and getting it wrong can easily kill one. If you think allowing the use of turbo makes the run easy, or “free”, you’re welcome to turn it on and try to get a Top 10 time in the most popular category. The only thing “free” would be your lesson in humility.

I think many purist arguments ultimately boil down to accessibility. A console, a game, and a recording method. That’s all you should need to compete. But personally, I believe the decision to allow turbo, (in this game, anyway) actually increases accessibility, rather than decreasing it. It opens the game up to more people who might have seen the excruciating practice of cutscene skipping as a reason to not even try. And above all, I will always support the health and well-being of runners first and foremost.

Screw purism. What good is an “as-intended” speed game that no one wants to play? Fun first, competition second.

I know a lot of you reading this won’t agree with me. I’m counting on it, in fact. All I can do is try to give as unbiased a view of this controversial rule as possible, with just a taste of my subjective opinion. But I’m not perfect. I might have glossed over an argument that has more nuance I hadn’t considered.

Most of all, I know you have your own opinion. And as is the law on the internet, your opinion is the only correct one.

So, I want to hear it! Whether you agree or disagree, let’s weigh this decision in the comments. What do you think? Should Turbo be allowed in Metal Gear Solid 2? Should it be allowed for cutscene skipping but not for gameplay elements such as firing weapons or passing the torture sequence? Would a rule like this influence your decision to run, or not run a game? Why or why not?