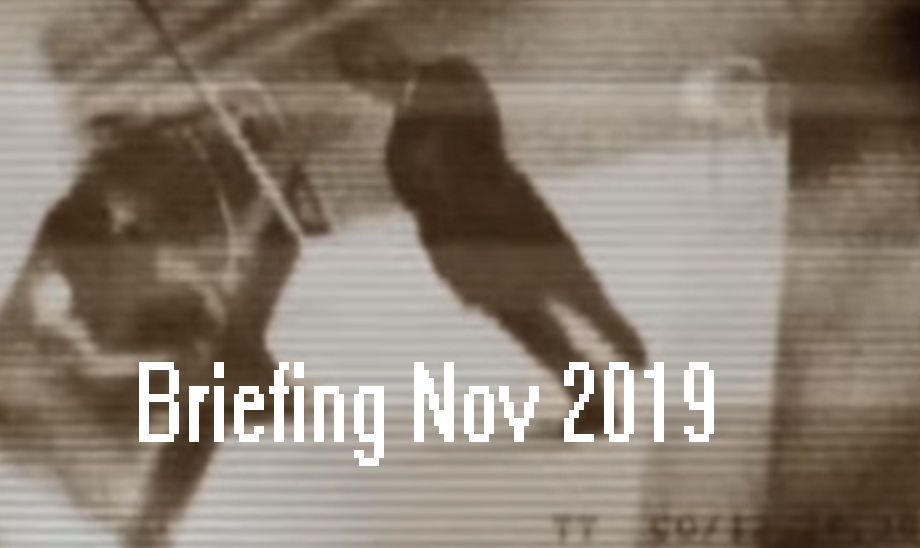 With the Holiday season dawning on us, the MGSR community isn’t taking time off! The building anticipation of TFA3, 5 ShotsFired runs, GDQHotfix VODs, VR receiving love, and new Metal Gear MSX routing for this November 2019 Briefing!

Don’t go golfing or swimming, as the Irish Thunder arrives December 7! Tactical Fundraising Action 3 will happen December 7 and 8, 2019. Each day starts at 9:30 AM EST. You can find the full schedule at the Horaro link. To donate, please go to the marathon page, there you can find the bidwars, incentives, and so on! A bidwar is brewing for the Metal Gear Solid and Twin Snakes ending, along with a PAL European Extreme bonus incentive run by Tyler2022. See you there!

Fun times were had by Metsametsa, miniomegaking, Plywood, Pythonicus, and KakusuSora! Metal Gear was featured on the GDQ Twitch channel, with over 4 games! Both the Community Spotlight and Treefort brought the sneaky action online. These include Metal Gear Solid, Peace Walker, The Phantom Pain, and Ghost Babel. You can watch the VODs below.

In Metal Gear Solid VR, the whole leaderboard has finally been filled with valid and recorded times! ApacheSmash achieved a 24.94 in Ninja 01! Two TAS times were improved by dlimes13, which is phenomenal! NG Selection 03 and Variety 02 were improved 0.06 and 0.12 respectively. Any time theenglishman’s Aug 2017 TAS becomes obsoleted by RTA players is a big deal, so congratulations to dlimes13 on those remarkable achievements.

Beyond the individual levels, dlimes13 posted the first full time attack of VR1, clocking in at 2:12:46. A good start!

In Metal Gear: Ghost Babel VR, the total in game time across all 90 levels went from 12:09.29 in Feb. of 2019 to a staggering 10:45.66! Some highlights include MarlonH8’s Advanced Mode Nikita 04, Brandon Donovan’s Advanced Mode R5 02, my Weapon Mode Grenade 05, and Stealth_Edge’s Sneaking Mode No Weapon 05! Stealth Edge found a way to save frames in turning, a big improvement that can save frames on certain levels! Along with this, I achieved a 38:17 RTA of the full 90 levels!

In Metal Gear Solid 2 VR, some levels have seen stiff competition and improvement. Raiden Hold Up 06 brings three titans of VR, dlimes13, PlatonicGuy, and Azu into competition with each other. PlatonicGuy got 20160 with this approach shown in his 20156. PlatonicGuy also broke a four way tie for Raiden Hold Up 01 with his 21122! Not to be upstaged, dlimes13 improved on the routing of Raiden Photograph 04, with his 50184, a 160 point improvement on SrgtSilent’s Run!

In preparation for his race against PlatonicGuy, dlimes13 also worked on the full game run for Raiden, achieving a 1:08:30!

Well done to the VR players!

2D Metal Gear aficionado Eriphram learned some new 2D runs beyond the NES games, with improved world records in Any% categories and new strategies! These include MSX1 Any% (PAL/NTSC/MSX2) and MSX2 Any% (NTSC). Eriphram stated on his stream that “it was fun tackling some new games.” You can find a description for his routing discovery for MSX1 below, with some editing.

The death abuse for MSX1 uses the safety system the developers put into the game to help players that are stuck. Some runs already took advantage of this system but in a smaller way. The scorpions’ poison can be removed by a death and continuing on your way (not in the original release). This expands upon the safeties.

When you die 5 times in a row, your inventory is loaded max with ammo and rations. I discovered this during a casual play through and first used it to “save” a bad run – discovering that the IGT does not advance when you die. There are two locations that lead to ideal use from what I have found. First, on the way down from the Roof o’ Fun (or Hell) to fill up your rations for the basement. The second place is to fill up the rocket ammo instead of going to crates. This is actually faster RTA and IGT to do so. The ideal room happens to be the roller by the elevator on Floor 2 – you can complete the deaths in a few seconds.

You can also skip the gas mask by picking up 4 rations (on easy) or 2 pickups of 3 (on original with a slight route change) at the start of the game for the 1st building gas room. You can wander through the scorpions without a care in the world on Easy (untested on original) and carry the poison status until the end of the game, and just tank all the laser damage during the metal gear fight.


Even in the more obscure runs in the series, people work hard to improve the routing! Congratulations to Eriphram on his efforts.